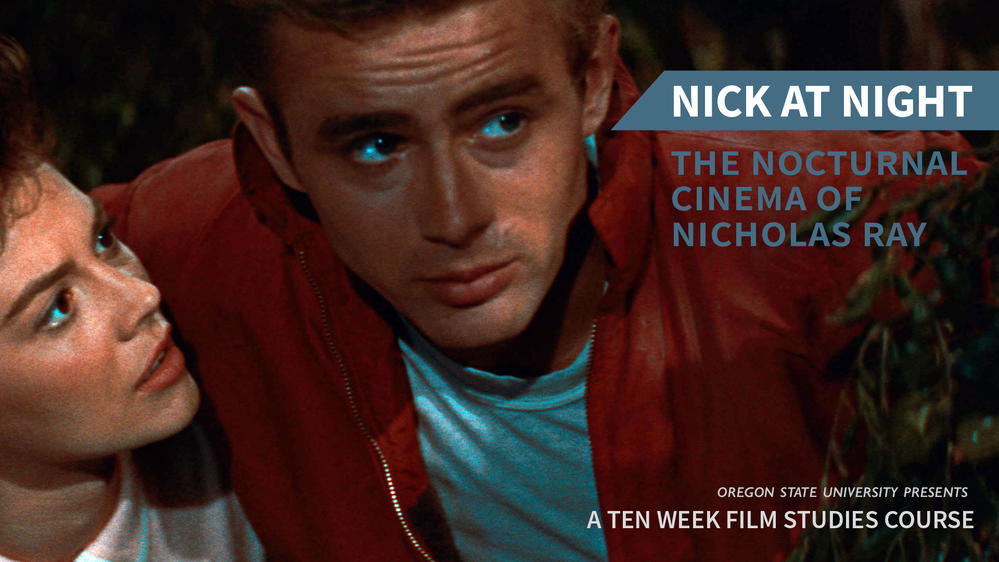 REGISTRATION
Advance Registration required: $129 for 10 classes
PLEASE NOTE: This is an Oregon State University film course that requires advance registration
Mention the name Nicholas Ray to the average filmgoer and you're likely to get a blank stare or maybe the possibility of vague recollection, possibly having heard the name somewhere once or twice before. Mention the same name to a well-seasoned cinephile and the response is more likely to be bowed reverence bordering on genuflection. Or, as Jean Luc Godard, avatar of the French New Wave once famously said, "Nicholas Ray IS cinema!"
This long overdue and comprehensive appreciation of one of the American cinema's most enigmatic masters -- Nicholas Ray, will focus on TEN of director's most iconic films -- films that not only helped define this brilliant auteur's thematic concerns and visual stylizations, but also catapulted his artistic reputation ever skyward: he is now accorded the same type of Hollywood glorification once only reserved for the likes of Hitchcock, Welles, and Lang. Throughout the late 40s and 1950s, Ray's films embraced a variety of genres and styles, from the noir shadings of his earliest work (THEY LIVE BY NIGHT, IN A LONELY PLACE and ON DANGEROUS GROUND) to his great Freudian western, JOHNNY GUITAR, the domestic melodramas REBEL WITHOUT A CAUSE and BIGGER THAN LIFE, and even a widescreen, Technicolor gangster musical, the criminally under-seen PARTY GIRL.
These films invariably dealt with deeply human emotions in a ruthlessly honest way, fairly uncommon to commercial American films of their time. Themes of loneliness and alienation dominate his best work and offer memorable performances from some of Hollywood's most important stars: Humphrey Bogart, Ida Lupino, Robert Ryan, Gloria Grahame, Robert Mitchum, Joan Crawford, Sterling Hayden, James Dean, Natalie Wood and a host of significant others will all turn up in these ten films, presented in their entirety in an environment of uninterrupted critical scrutiny on the BIG SCREEN at Cinema 21, followed by lively, in-depth discussions.
These are the films we'll be watching at Cinema 21:
1. THEY LIVE BY NIGHT (1948) April 4
2. KNOCK ON ANY DOOR (1949) April 11
3. BORN TO BE BAD (1950) April 18
4. IN A LONELY PLACE (1950) April 25
5. ON DANGEROUS GROUND (1951) May 2
6. THE LUSTY MEN (1952) May 9
7. JOHNNY GUITAR (1954) May 23
8. REBEL WITHOUT A CAUSE (1955) May 30
9. BIGGER THAN LIFE (1956) June 6
10. PARTY GIRL (1958) June 13
No class on SAT MAY 16
PLEASE NOTE: This is a complete program and no individual tickets/days will be sold.

The Primacy of the Visual: Film Noir in the FortiesTuesdays • April 7 - June 16 REGISTRATION
Advance Registration required: $129 for 10 classes
::: PLEASE NOTE: This is an Oregon State University film course that requires advance registration :::
Film Noir, as a dominant and influential cinematic style, first exploded across American movie screens sometime in 1940. And almost immediately, Hollywood studios seized upon this exciting new direction for crime films -- a dramatically startling combination of German Expressionist cinema of the 1920s and French poetic realism films of the 30s, blended into a harshly modern cocktail of chiaroscuro lighting, psychologically aberrant behavior, and the unmistakable feeling that Fate (or some other mysterious force) would inevitably play a role in the final outcome. Bathed in luxurious shadows and menacing nuances, these visually stimulating and sometimes disreputable excursions to the lower depths, have now become essential to any discussion of film in the 20th century.
From the musty shadow factories of Poverty Row to the opulent excesses of big-budget Hollywood studios, film noir in the 1940s captured the fatalistic mood of mid-century America better than anything else being released into movie theaters at that time. Gritty, honest portrayals of men and women at their worst, doing their best to cope with what a world of shadows has given them.
French writers and critics were the first to actually point out the visual splendor of these new American crime films and were the ones to coin the very term film noir -- literally, black film. Ultimately their enthusiasm would spawn a library's worth of literature and the momentum to eventually create an entire cinematic movement, still vibrant and universally appreciated today. The films selected for this ten-week course represent the cream of the 1940s crop of noir films. Directors like Fritz Lang, Robert Siodmak, Anthony Mann, Jacques Tourneur, Orson Welles, and Edgar G. Ulmer unveil sights and ideas once considered unwholesome and unwelcome in the American cinema. This highly intensive experience is designed to be a total immersion into the darkest corners of the imagination: a treasure trove of stylistically dazzling films, seen in their entirety on the BIG SCREEN at Portland's Cinema 21, and discussed with respect to their overall place in the film noir universe.
These are the films we'll be watching at Cinema 21:
1. I WAKE UP SCREAMING (1941) April 7
2. BLUES IN THE NIGHT (1941) April 14
3. PHANTOM LADY (1944) April 21
4. MURDER MY SWEET (1944) April 28
5. DETOUR (1945) May 5
6. SCARLET STREET (1945) May 12
7. BLACK ANGEL (1946) May 26
8. OUT OF THE PAST (1947) June 2
9. NIGHTMARE ALLEY (1947) June 9
10. THE LADY FROM SHANGHAI (1948) June 16
No class on TUES MAY 19